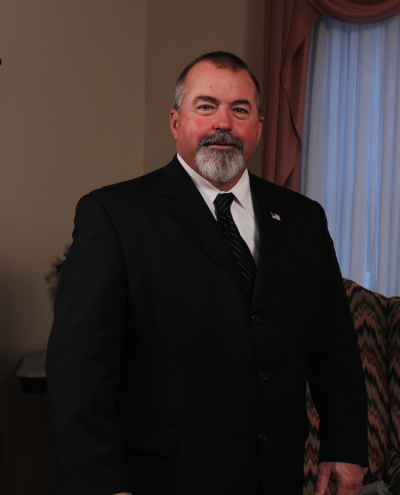 Elmer Ebling has been practicing the funeral business for 27 years. He was  born in Pottsville, the son of the late Theodore “Ted” and Alice (Betack) Ebling. He was a graduate of Blue Mountain High School, Class of 1980. He then attended Northampton Community College, where he received his degree in Funeral Service.

Elmer is involved with his church, St. Mark’s United Church of Christ, Cressona, the Cressona Lodge #222 F&AM where he served as a master, Beckville Gun Club, Cressona and Red Hill Gun Club, Summit Station. He is also a member of the Cressona and Wayne Township Lions Clubs.

He is married to Suzanne “Ginger” (Rhodes) Ebling and has two daughters, Melissa Clark wife of Shawn. She is a high school math teacher in the Lehighton School District. Elmer’s youngest daughter is Caitlyn Ebling, she followed in her father’s footsteps and also went to mortuary school. She is now a funeral director and works at both funeral homes and the crematory. 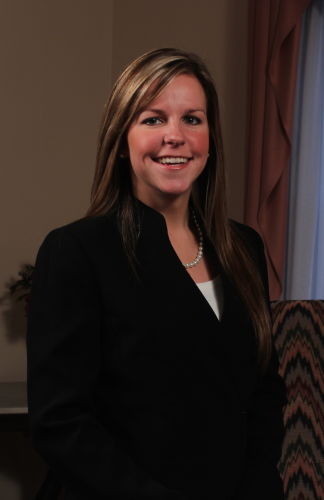 Caitlyn has been actively involved in the funeral profession since 2006. She has grown up in the family business and is readily available to help families in their time of need. She is the daughter of C. Elmer Ebling and Suzanne “Ginger” Ebling.

Caitlyn is a graduate of the Blue Mountain High School, Class of 2008. After graduating, she attended Northampton Community College, Bethlehem and completed her degree in Funeral Service Education. She graduated college in 2011 and immediately began her one year of internship at the Geschwindt-Stabingas Funeral Home, Inc. and Ebling Stabingas Funeral Home. She received her Funeral Directing License in May 2012. She intends to stay local and work in the family business that she grew up in.

She has been certified through the Cremation Association of North America, (CANA) as a crematory operator for Riverside Cremation Services, LLC, located on site.  Caitlyn also serves as a certified celebrant and has conducted numerous funeral and memorial services since 2012.

Caitlyn is a member of multiple organizations, including the Schuylkill-Lebanon chapter of Pennsylvania Funeral Directors Association, which she served as past president and St. Ambrose R.C. Church, Schuylkill Haven.

Caitlyn married her husband, Andrew S. Haus on October 3, 2020. They reside in Orwigsburg with their Great Dane, Daisy. 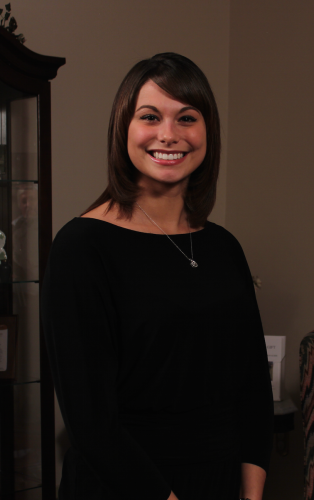 Becky is the daughter of Albert & Linda (Albitz) Deatrich.  She is a graduate of Schuylkill Haven Area High School, Class of 2008.  Following high school, Becky graduated from Northampton Community College, Bethlehem, majoring in funeral services. She received her degree in May 2011 and served her one year internship with the Geschwindt-Stabingas & Ebling-Stabingas Funeral Homes.  She received her Pennsylvania State Funeral Director’s license on June 1, 2012. Becky has been employed by the funeral homes since 2008.

She has been certified through the Cremation Association of North America, (CANA) as a crematory operator for Riverside Cremation Services, LLC, located on site of Geschwindt-Stabingas Funeral Home, Inc., Schuylkill Haven.  Becky also serves as a certified celebrant and has conducted numerous funeral and memorial services since 2012.

She married her husband, Brandon M. Devlin, son of Michael & Judith (Hummel) Devlin, Schuylkill Haven, on September 12, 2015.  The couple resides in Auburn in the Lake Wynonah Community.  Becky and Brandon welcomed their first child, Daniel Deatrich Devlin on April 19, 2020; and are expecting their second child in October, 2022.

Becky is truly honored to serve families in the very community she was raised. 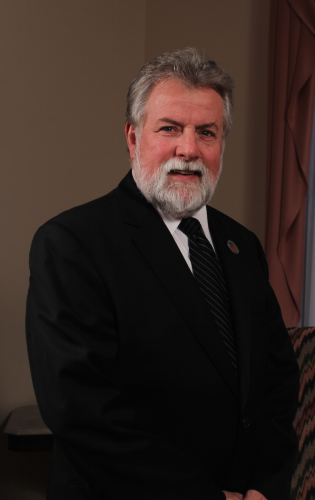 Born in Pottsville, William C. Pugh is the son of the late John J. and Marguerite Steidle Pugh. Bill graduated from Pottsville Area High School. After graduation he served eight years in the United States Air Force, as an operating room technician. While in the service he attended Mohawk Valley Community College and Utica College. After his honorable discharge from the service he attended Penn State Schuylkill Campus.

He is married to Mary Ann Allen Pugh and they have two daughters, Jennifer, wife  of Dr. Michael O’Connell, and Heather Lynne Pugh. They are also the proud grandparents of Ava & Raegan O’Connell.

A year of daily grief support

Our support in your time of need does not end after the funeral services.  Enter your email below to receive a grief support message from us each day for a year.  You can unsubscribe at any time.